Task: This report is based on the case study provided in “Reawakening the Magic: Bob Iger and the Walt Disney Company” and has found two major issues. One of the issues must be from your Part A submission. The report will present and analyse the two issues in depth and provide a set of recommendations using the support from peer reviewed journal articles. 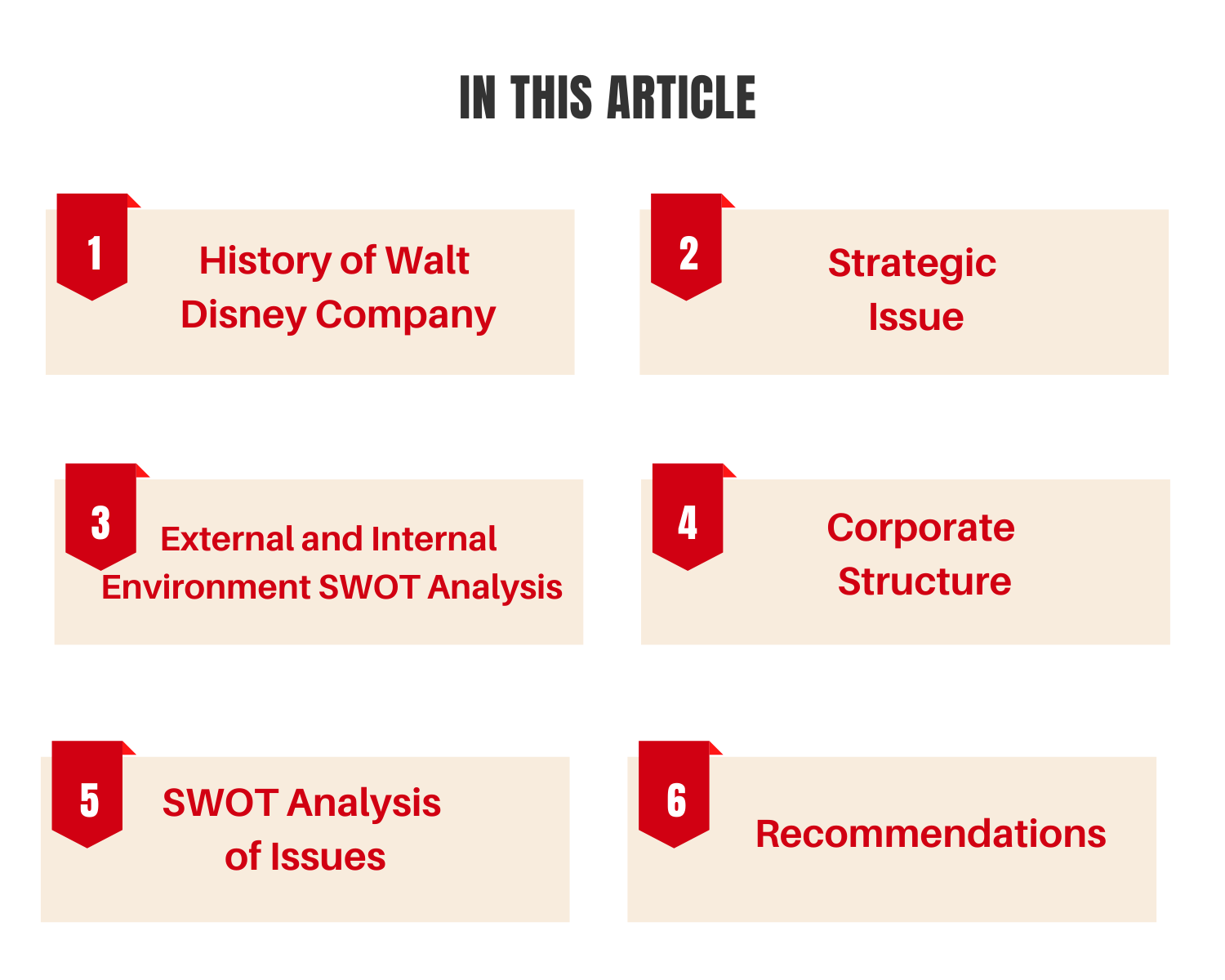 2.0 1st strategic issue
As mentioned by Roper et al. (2016), the Walt Disney Company has experienced different strategic issues. The strategic management has determined that its competitors are taking advantages of its weakness and can easily pull the Walt Disney Company behind in the market. When its competitors found a better way to provide sports program at a very low price to the consumer, the Walt Disney Company did not pay attention to keep up with this technology. This is the main reason Disney lost a majority of its youth audience. The Walt Disney Company also faces challenges from its competitors who have strong presence in the market. The Walt Disney Company has focused on providing entertainment programs according to the taste and preference of the customers if the company’s management does not focus on the changes in the taste of the customers then it will easily lead to its downfall. It is the duty of the company to determine its customers taste and preferences to make its brand more interesting. Disney has faced a lot of criticism in the market along with that it also faced motivating response. The company started making changes to attract a large number of customers which may be achieved or can never be achieved. Disney realized that the positive thought have turned into critics. The company got clear message from the people that the company had started to release irrelevant program. The company also faces challenges regarding price of its products. The competitors of Disney are providing the products and programs to the public at very low price comparing to the cost of product of the company and they can act as threat for the Disney Company. Disney did not focus on maintaining the technology and new strategies. The positive changes made by the management of the Walt Disney Company have been transformed from positive to a criticism. This was a very hard time for Disney to maintain their status more specifically maintaining a good position in the market along with the constant focus on tastes and preference of the customers.

2.1 Issue statement
According to Massetti et al. (2016), Disney is located in America and is a well-known company. Disney characters have played a significant role as an influence and entertaining figure in the lives of most adults these days. This is one of the most famous companies in the world and the reason behind this is it has used its external environment effectively to achieve its goal. External environment are event of outside a company which can easily affect an environment. All children love the experience to be a princess or queen and king or a prince. The people who visit Disney land are never bored. Disney land allows visitors to meet their favourite Disney characters, be it animated or live action. The company has many competitors. The competitors of the company enable them to improve and get better and better. Mickey mouse has been characterised as the unofficial mascot of the Disney company for decades.

Internal environment of the company include strength and weakness. Disney is a multinational corporation facing internal weakness and strength. Internal environment of Disney totally enclosed its strength and weakness with which the company has faced much criticism. The corporate culture of Disney circulates at all the levels of hierarchy and its workforce is aware of its principles. It has adopted different backgrounds. It is one of the largest multinational companies. It has generic hierarchical structure and also has a maintained balance of power and additionally it has a large amount of resources. As opined by DeMicco et al. (2016), the company faces challenges regarding price of its products and also faces a strong competition in the market. Disney has started losing a good number of subscribers for ESPN. The company faced much criticism in the market along with that it also experiences motivating response.

2.2 Analysis
External environment: Opportunities and Threats
Opportunities: According to McCoskey et al. (2018), these opportunities can be determined through the SWOT analysis. In Disney opportunities are the external strategies factors which lead to increase revenue. The Walt Disney Company needs to focus on the following opportunities:

The Walt Disney Company got an opportunity to adopt all the new technologies for example digital technologies for improvement of the business. The Walt Disney Company also got an opportunity of growth in various industry which leads to grow its business through the managerial approaches. The growth of developing market is an important factor which also creates an opportunity for the company to develop their business into the market. Through expansion, innovation and diversification the company can grow its revenue.

Threats: The threats have been identified through the SWOT analysis. The Walt Disney company management needs to handle the following threats towards business:

Internal environment: strength and weakness
Strength: Strength of the business protects the company from the problem in future. In SWOT analysis the internal factor strengthen the growth of the business by supporting the strategies of management which leads to grow the business. The following are the strength which gives strength to the Walt Disney Company:

Disney is a very popular brand all over the world. The portfolio of popular products is growing and this is one of the important strength of the business. The company's movies, programs, amusement park, cartoon characters and services are increasing. As opined by Holcomb et al. (2017), the company has gained high popularity from the public. This is one of the most important strengths of the company.

The Walt Disney Company has faced many weaknesses which have been identified by the swot analysis the company have many limited innovations the company needs to innovate continuously for the development of the product. In adopting new technologies the company has faced reactive approaches instead of aggressive approach. The company needs to focus on expansion of its amusement park and all other different types of park. Limited expansion of park is a weakness for Disney. According to Koontz et al. (2019), the company has focused on quality of product and features instead of focusing on continuous innovations. Limited diversification is also a weakness which has been identified during this analysis of Disney.

Corporate culture: Business corporate culture is related to American culture. According to Xiaoli et al. (2019), the business is successful because it has a corporate culture that gives power to the employee to improve their performance and profit of the company. The corporate culture gives support in managing the growth strategy and opportunities to the corporation. As per Li et al. (2018), this culture puts emphasis on the innovations which motivates the company to develop its product which matches with the new technologies and trends in the entertainment industry, mass media industry and in the amusement parks and resorts industry.

3.0 2nd Strategic Issue
As opined by Pelletier-Gagnon et al. (2017), the Walt Disney Company faces many challenges in formulation of strategy. The biggest problem the Walt Disney Company has been facing in recent year is decreasing in subscribers to its network, ESPN. In 2010 it had 100 million subscribers, the figure dropped in 2015 to 92 million. This shows the decline of the Walt Disney Company and its revenue in media network parts fell by 2% year over year in 2017. According to Brito et al. (2018), its operating income also decreased by 4%. Star wars franchise and box office help the studio entertainment section bring Disney back in the game. This represents a major problem that networks needs to deal with. The company needs to convert TV to internet services. One of the important strategic issues that the world Disney has been facing is it losing a good number of subscribers in the ESPN. As per Aleong et al. (2018), when the company began its journey it had more number of customers compared to the recent years. It is holding very few customers in entertainment program and sports program network. The company is facing this issue because it is not applying the new technologies which have been applied by its competitors that is the reason it is facing a tough competition in the market. The company faces challenges in adopting the new technologies, competitors of the company has already adopted the new technologies but the Walt Disney Company has focused more on providing quality product and in making strategy instead of focusing on the recent trend and taste and preference of the consumer.

3.1 Issue statement
According to Warrick et al. (2017), the Walt Disney Company can be differentiated by its fundamental practice and knowledge. Disney has a clear corporate strategy which has been contributed to the success of the company and gives importance to its brand image. The company's strategy is to make exclusive and magical products. The biggest problem the Walt Disney Company has been facing in recent year is decreasing number of subscribers for their ESPN network. The company faces challenges in adopting the new technologies. The corporate culture of the Disney circulates at all the level of hierarchy and its workforce is aware of its principles. it has adopted different backgrounds. It is one of the largest multinational companies in the world. The company needs to convert TV to internet services. Disney has announced a creation of direct customer in international unit. The company is facing this issue because it is not applying the new technologies which have been applied by its competitors and it is one of the reasons for the growing competition in the market.

3.2 Analysis on issues
Trend analysis: In trend analysis in 2014 the gross domestic product was 4% and next 5 years it became 3%. The unemployment rate had decreased by 9%. Disposable income of the company increased by 9% in next 10 years and in 2013 its consumer spending increased up by 5%. State spending went up globally 3.2% - 4.6 % of gross domestic product (McCoskey et al., 2018). 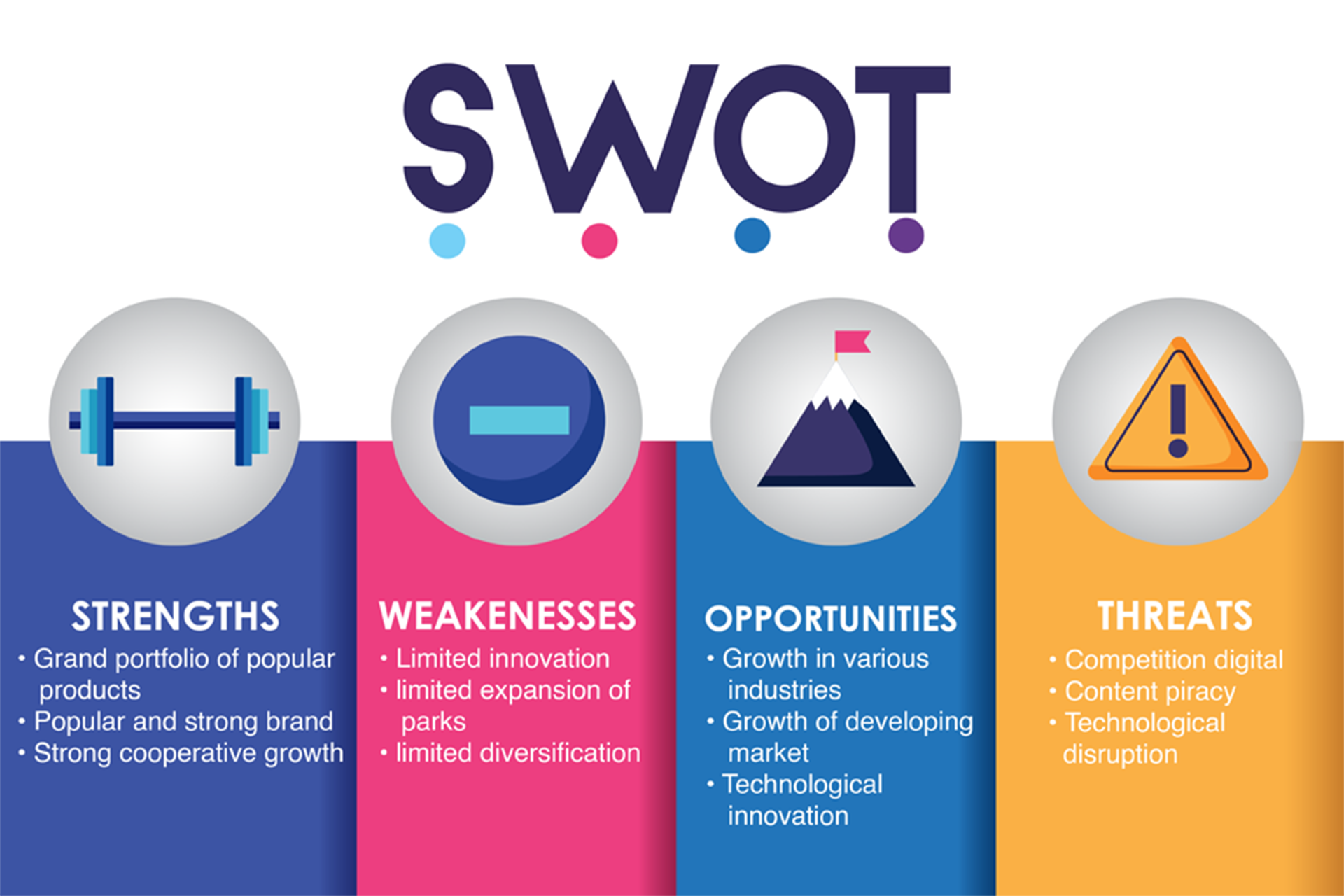 Weakness: According to O’Toole et al. (2016), the SWOT analysis model has been applied by the organization to determine the weakness of the company. The Walt Disney Company has high cost structure and has high attrition rate and it needs to invest a lot of money compared to its competitors in development and training programs of the employees. The current asset ratio represents that the company needs to use its cash in a better manner the way it's doing at present. Due to high rate of its product it's losing its opportunities. As per Isabella et al. (2017), the Walt Disney Company is focusing on quality of the goods not on the rising price which is not good for demand forecasting. The most important factor which can lead to downfall of the company is its inability to adopt continuous innovation. In the viewpoint of Voigt et al. (2017), the company is releasing irrelevant programs and characters which public does not like. The company needs a large amount of capital in executing an innovation and entertaining and development program of its employees. 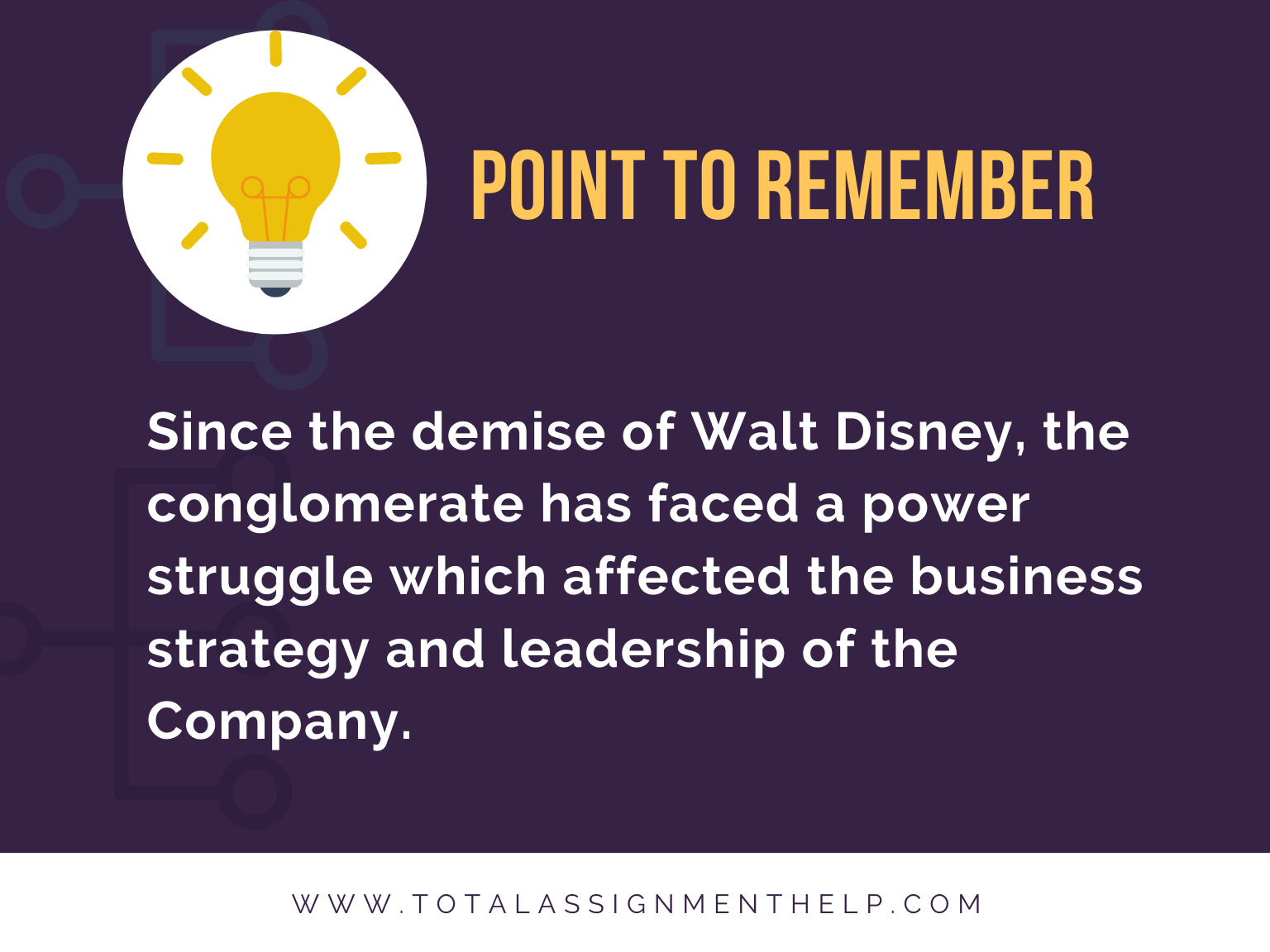 Massetti, B., Angelidis, J. and Murphy-Holahan, M., 2016. The Quantification of Social Action in US Corporations. Journal of Leadership, Accountability & Ethics, 13(2).

Smagorinsky, P., 2016. An Autistic Life, Animated Through the World of Disney: A Loving Autoethnography. In Creativity and Community among Autism-Spectrum Youth (pp. 269-291). Palgrave Macmillan, New York. 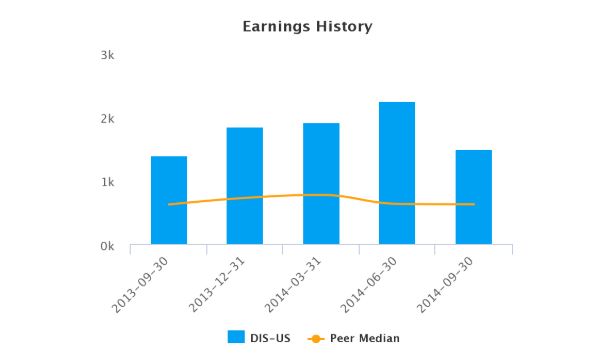 Get Top Quality Assignment Help and Score high grades. Download the Total Assignment help App from Google play store or Subscribe to totalassignmenthelp and receive the latest updates from the Academic fraternity in real time.