Task: Conduct a critical research on the topic“Is there any difference in oral hygiene and dental health between high social-economic and low social-economic communities, and does that map with an incident of oral cancer” and prepare a detailed healthcare assignment report using relevant references.

Introduction
This report on healthcare assignment is based on the research question of whether there is any noticeable difference between dental health and oral hygiene among the low and high socio-economic communities leading to oral cancer in humans or not. The report will start with the study's aims and hypothesis in the discussion in the first section. The next section of the information will reflect on the methods, including the population involved in the study and the recruitment process of the respondents. The process will include sets of structured questionnaires. The report will finally end with statistical analysis, results and discussion on the findings.

Aims and Hypothesis
The research aims at identifying whether there is any visible difference in dental health and oral hygiene between the socio-economic background of people belonging to high and low-class communities. The report also aims at assessing the relationship between this and oral cancer. The research will analyse the patients' data between Melbourne and Sydney dental hospitals. The study also aims at comparing the inequality magnitude of the socio-economic communities in delta disease and oral health. This paper will also analyse whether this research requires any ethics approval or not. The research hypotheses are depicted as follows: H0-There is no significant difference between dental health and oral hygiene, that is not impacted by the socio-economic and socio-demographic communitiesand that is identified by circulating miRNA biomarker. H1- There is a significant difference between dental health and oral hygiene and these are related to the socio-demographic and socio-economic communitiesand this is recognised by circulating miRNA biomarker.

Methods
As per many research studies, it can be effectively stated that oral cancer is one of the majorly occurring cancers that results in more than 100,000 deaths every year. On the contrary, about 60% of the survival rate has been witnessed within about five years. Moreover, the rate of incidence occurrence is increasing among the young population globally who are categorised below 45 years of age (Mejia et al., 2018). This is because the young generation is more addicted to smoking, chewing tobacco and consuming alcohol daily. The integrated use of tobacco and alcohol lead the population towards increased risk of dental issues followed by oral cancer. This research study has been carried out with the young population of two dental hospitals in Melbourne and Sydney. The research methods include studying the people and recruiting individuals perfectly matching the research topic. The miRNAs were witnessed to act as endogenous controls to treat oral cancer at early stage via GMN method. The heat map expression profile was developed with the help of fold changes calculation method between normalised counts and means of the normalised counts.The population study and their recruitment process, making structured questionnaires, statistically analysing the data and getting results from the survey, along with critical discussion, have been described in the following section.

Study Population and Recruitment
The structured questionnaires for executing the research study were given to two dental hospitals, one from Sydney (Sydney Dental Hospital) and another from Melbourne (The Royal Dental Hospital of Melbourne). As per Yuet al. (2016), the Australian Health Ministry has approved this research study. The patients of these hospitals were observed and targeted to improve the doctor's knowledge about the patients referred to such specialised clinics. Every selected participant gave their written consent in this participation. The patients were chosen sequentially based on specific eligibility criteria: (1) the respondents should be 18 years old or more than that, (2) they should be educated enough to read and realise the significance of the questionnaires and answer appropriately.

The Questionnaire
As opined by Villaet al. (2011), the qualitative questionnaire includes open-ended questions for more personalised detail and greater depth into the study. The structured questionnaire included the respondents' socio-economic information, their birth country, gender, educational status and age; medical history, if any; anyone from the family suffering from oral cancer; alcohol and tobacco habits; physical activities and regular diets; oral symptoms and hygiene habits (Stein et al., 2018). The respondents were questioned if they knew about the risks associated with oral cancer. Some of the questionnaires are depicted below:

• Can individuals have malignant tumours due to the oral cavity
• Is this disease treatable and curable
• Is a red or white spot in the mouth a sign of oral cancer
• Are you a chain smoker
• Do you drink and smoke currently If not, were you involved in these activities previously
• Do the clinicians provide education and counselling on the risk factors of oral cancer
• Do you belong to a high or low socio-economic community
The respondents answered these questions with "yes" or "no". The research data were collected from both the dental hospitals after eight weeks.After identifying respondents at high risk, they recruited around 150 respondents for screening and testing their saliva samples to determine the disease. With the help of Spearman analysis of correlation, the miRNA levels have been correlated with ImPACT, WAIS-IV and age. The collected data were rechecked to distribute and transform the parametric tests via SPSS v.22.They removed 50 subjects who did not perfectly match the research's inclusion criteria. Out of these, three were at high risk of OSCC cases and 18 subjects were taken as normal controls. An appropriate clinical pathway has been followed to screen the biomarkers present in the saliva sample.

Statistical Analysis
Currently, many research studies have shown that OSCC (Oral squamous cell carcinoma) has accounted for about 90% of oral cancers. However, earlier detection seemed to increase the rate of survival. Luzziet al. (2020) explained that the respondents were assessed to measure their saliva samples as chain smokers and drink regularly in Sydney and Melbourne. The qualitative and quantitative statistical analysis of the data developed a panel made of four proteins that detect nearly 88.6% of the patients at the early stage and about 91.6% of the patients with 80% specificity. The quantification process of salivary proteins was collected from the saliva samples of the respondents who were randomly surveyed with the help of the LC-MRM-MS assay of the 100 selected targets.To effectively determine the peptides or candidate proteins in the saliva samples, around 20 surrogate peptides were taken to represent the 20 chosen peptides. According to Stormonet al. (2021), the socio-economic status and inequalities of the people belonging to the higher and lower communities were integrated with the oral health group either objectively or subjectively.

Circulating miRNA Profile via NanoString Design Technology as an Effective Biomarker
The expression profiles of the saliva samples collected from the respondents comprising miRNA has been performed via NanoString technologies in nCounter FLEX. The profiling technique was performed on the respondents to stabilise the reference miRNA used as biomarkers. These miRNAs were witnessed to act as endogenous controls to detect and treat oral cancer at early stage via GMN method. The heat map expression profile was developed with the help of fold changes calculation method between normalised counts and means of the normalised counts. With the help of Spearman analysis of correlation, the miRNA levels have been correlated with ImPACT, WAIS-IV and age. The collected data were rechecked to distribute and transform the parametric tests via SPSS v.22.

Results
As per the statement of Doramac, Naini & Brennan (2020), the integrated study of the socio-economic data and data obtained from the saliva samples included 100 respondents, of whom nearly 40% were from Sydney and 60% from Melbourne. The research study has developed salivary biomarker panels to detect OSCC by logistic regression and discriminant analysis from the study population. The LR or logistic regression chose four proteins from the panels, including HSPA5, ANXA2, PRDX2 and KNG1. On the other hand, the discriminant analysis chose seven proteins as YWHAB, TIMP1, FLNA, ANXA2, PRDX2, KNG1 and HSPA5.

The later proteins were undergone through CART analysis. They helped the research study to develop a decision tree of CART analysis that offered an accurate cutoff value of the saliva constitution present in each protein of the collected saliva sample of the respondents. Sydney depicted the highest estimate associated with untreated decay, while Melbourne showed the highest prevalence of poor/fair SROH (Self-rated oral health). Sydney had the highest inequality rate in mouth decay, and Melbourne had the lowest inequality rate in poor/fair mouth decay (Dimitropoulos et al., 2018). Sydney also had the highest number of individuals who did their primary education, and Melbourne is considered the lowest in the case of primary education. Among 200 miRNAs used as biomarkers for detecting and treating oral cancer at an early stage were critically analysed by salivary nCounterNanoString, only 50 were selected. These 50 miRNAs expressed differentially across the taken population. The single TaqMan assay technique has been used to validate the research data and findings that critically observed the 50 selected miRNAs in independent and separate groups.

Table 1: Demographic features and consumption of alcohol and cigarettes 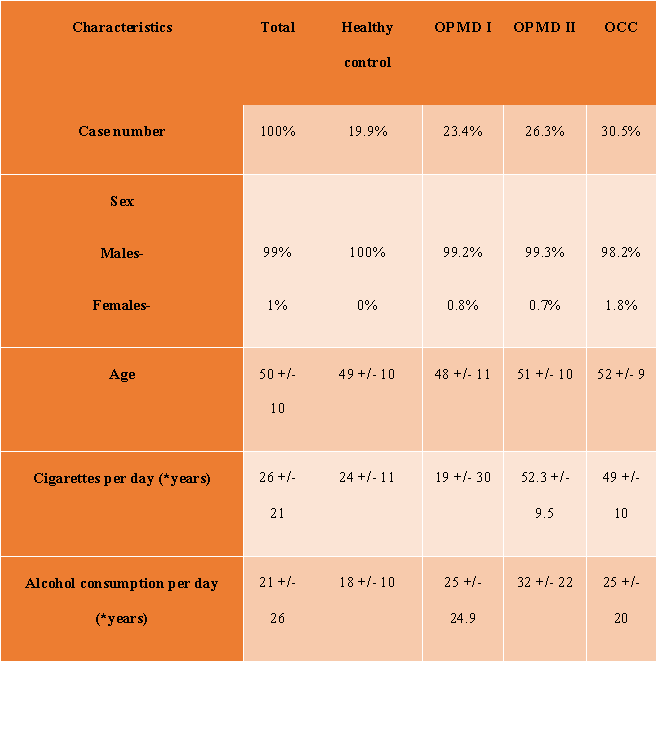 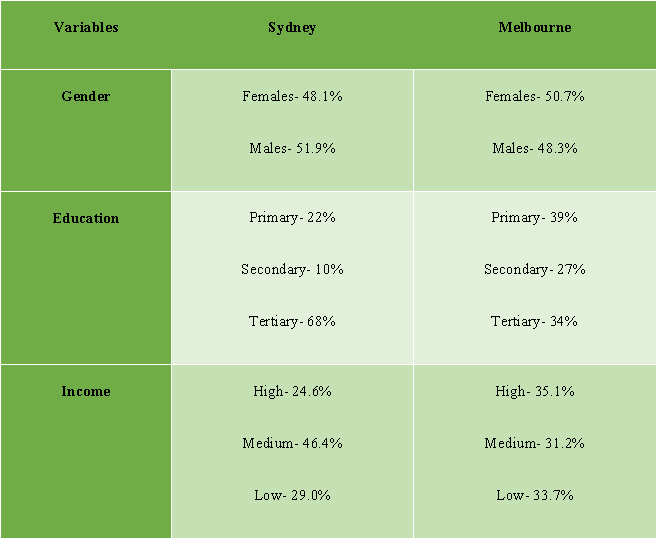 Discussion
Basha, Ganapathy & Venugopalan (2018) explained that the results and findings demonstrate inequality in the socio-economic and socio-demographic communities in the SROH and untreated dental decay among the adults in Sydney and Melbourne. This assessment is associated with the pathological abnormality of the disease, including the social as well as mental well-being of the individuals. Interestingly, from the results mentioned above, it can be stated that Sydney had a greater rate of disease occurrence as the socioeconomic gap in the mean number and proportion of untreated dental decay has been comprehensively increasing compared to Melbourne (Elrayah, 2019). Therefore, it is estimated that nearly 76% of the population in Sydney and around 24% of the people in Melbourne are supplied with artificial fluoridated water for drinking purposes.

This accounts for nearly 2.6%, and women are affected by this disease to almost 1.5%. Dissatisfaction with the appearance of teeth is integrated with tooth crowding and alignment, discrepancies and fractures in teeth. As stated by Becket al. (2017), it can be safely noted from the findings that if OSCC is detected in the early stage, it could effectively save the lives of many patients and minimise the morbidity burden that generally results from late-stage surgical resection. From the results and findings, it can be discussed and then concluded that circulating miRNA can be used as an effective biomarker as it fulfils the research hypothesis and can be used to detect and treat oral cancer at an early stage. This, circulating miRNA can be used as a potential and novel biomarker for oral cancer treatment.

Ethics Approval
Human ethics consideration is mandatory as the respondents should not be included in the survey process unless they provide their consent. As stated by Swerissen, Duckett & Moran (2018), the information provided by the respondents should not be revealed to others except the ones involved in the research study. The data should be destroyed at the end of the research. These are a few ethical considerations that need to be maintained to make the process smoother.

Conclusion
The research results and discussions have critically demonstrated and discussed differences in dental disease and oral health. This paper also depicted that the difference varies as per the education groups, income and socio-economic gradients of the self-reported and determining indicators. Respondents from lower educational and income groups suffer from a high rate of dental decay that remains untreated over the years. This results in poorer oral health as compared to people from higher socio-economic and income groups. Differences in the outcome or results indicate the conceptual and accurate difference between disease and health. The inequality magnitude variation in Sydney and Melbourne suggests further study of contextual and socio-cultural determinants associated with dental disease and oral health leading to oral cancer.