Task: Provide a detailed report on the Google core competencies.

Introduction
It was the students of Stanford University, Sergey Brin, and Larry Page who have established the company of Google. It was in the garage of a friend that they had found the company in September 1998. By August 2004, the company was able to accumulate about 1.67 billion USD via Initial Public Offering. By then the company had developed its operations all over the world which employed overall 12000 professionals. The efficient human resources have contributed profoundly to the google core competencies. Arriving at a profit through an ethical manner by considering all the challenges and tasks as fun within a corporate culture is the major statement of Google Inc. At present, the company has developed into a multinational public corporation, which provides internet facilities and various IT products all over the world. Its user-friendly characteristics and use of advanced technologies have made it the largest search engine in the world. The active participation of the company in other fields like the development of android software, Gmail service, various social networking platforms, etc. has converted it into a dominating company in the world IT scenario. The company has developed close links with various smartphone manufacturing companies by the active contribution of Android OS development. Without any doubt, Google could be stated as one of the ruling companies in the global market (Luchetta, 2014).

Below is provided a SWOT analysis of google core competencies.
Strength 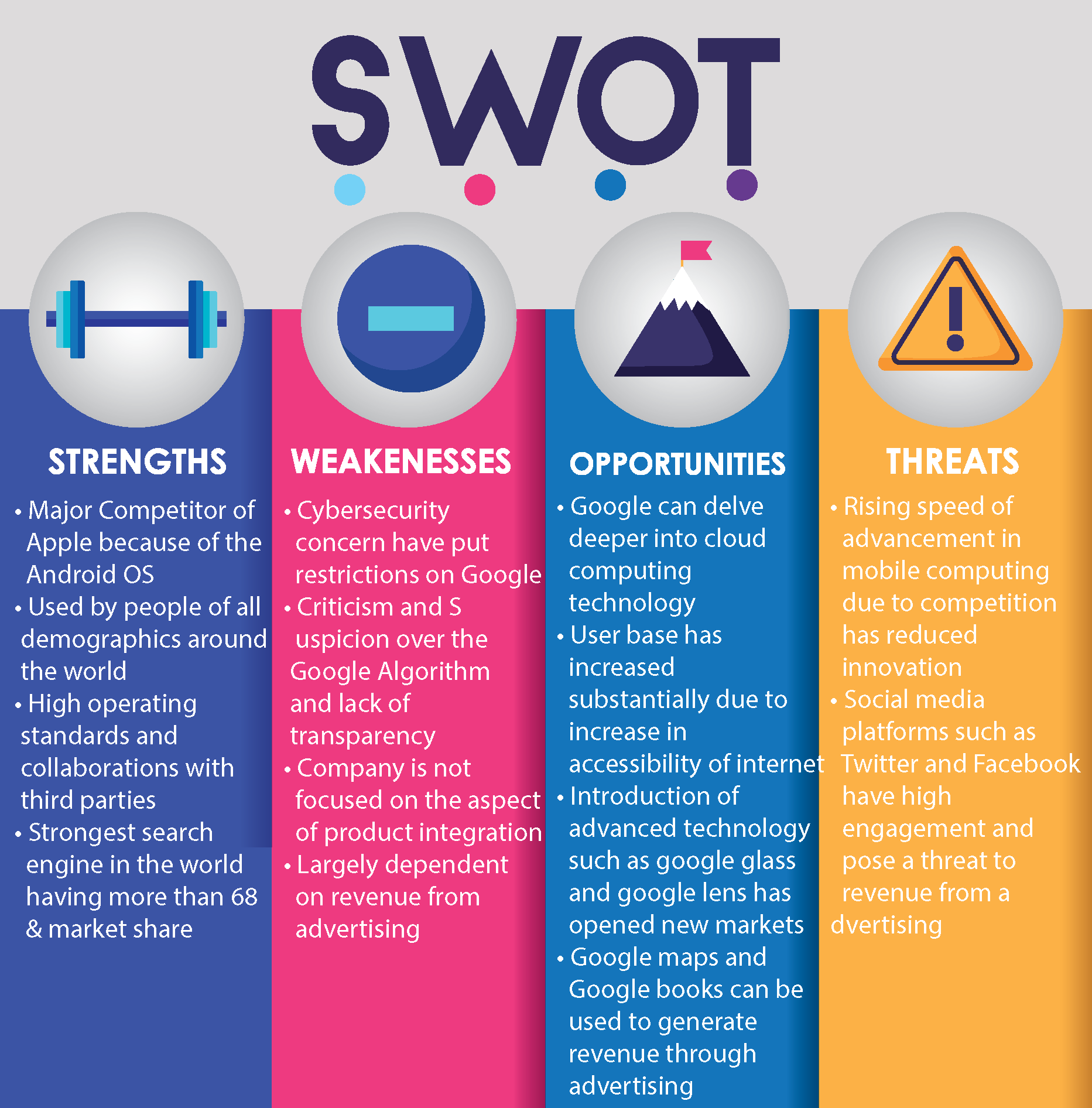 Hence it gets clear from the above-provided competitor's analysis that the major competitors of the Google Company are Microsoft and Yahoo. In the previous years, the turnover of Microsoft and Yahoo was 4.8 billion USD and 6.8 billion USD respectively. The high competition offered by these companies has helped the customers with getting high quality and relevant search results. The competition has coerced Google to develop the technology which will direct the user faster to the advertisements when compared to the competitors. The constant threat offered by these companies has helped Google to sustain itself on the track of technological development. Almost 11 % and 24 % of the global market are still held by Microsoft and Yahoo, respectively. The increased arrival of new websites, along with huge investments in advertisements is creating fierce competition among these companies to acquire a higher market share.

Recognizing Google Core Competencies
The whole Google core competencies depend upon the development of new technological knowledge that could further advance the existing search engine. Further, the search engine should be advanced in handling the database on the internet platform so that it will get effective in providing relevant results for the online users (Hou, 2014). The high proficiency in the aspects of software engineering and computer hardware had contributed heavily to the Google core competencies. Google still is known among the global community as an efficient and reliable search engine. The Google Company could be considered as the flag bearer of innovative culture among the global community.