Research proposal
1. Introduction
The main concern of this proposal on sociology assignmentis on thestate of “water crisis” which is something that affects human lives by running out of water. Through this crisis, people cannot get enough water to wash, drink and more importantly would not be able to feed crops (Hu, p.136856). This will lead to a situation where economic inequality or the economic crisis is the main part of society. Moreover, human lives will be affected by many water-related diseases, such as; Hepatitis A, Typhoid, Cholera, Polio, and many more. The reason for the situation is managing the water inappropriately and many safety precautions are violated by locals or individuals. The proposal will be mainly concentrated on how the global water crisis is affecting the global communities. There are some of the discussions given below where some of the important and predictable aspects will be mentioned.

1.1 Background of research
A water crisis is a serious problem and this particular issue has already affected many of the continents. Also, it is based on a survey where the report shows, almost around 2.8 billion people over the world are getting affected in one month out of every year (Abbott and Benjamin, p.534). In this situation, it is difficult to figure out the freshwater sources in such a situation where a crisis is going on. The reason behind this crisis can be many, such as; continuous climate change of a region (Floods or droughts), overuse of the preserved water body, raising pollution of human waste materials, and many more.

1.2Aims and objectives
The aim of this research is to evaluate how far the consumption of branded bottled water can resolve the growing global water crisis

1.4 Significance of the study
In recent days there are many instances where it can be seen that global water crises are affecting and deteriorating the human standard of living. It can be seen in such places which are developing regions and also in rural areas. Water usage is a basic need of human beings and also a fundamental right to consume clean water (Dinar et al., p.213). Although, many impacts are there for which many women and children are being affected by this disaster but also in the United States branded bottled water is being used as fresh and clean water.

1.5 Justification of the topic
A serious crisis penetrates any object harshly and, in this case, the situation will affect the whole human race with many severe diseases which will eventually drive the situation to a diminishment of the human race. Humans will only be dependent on medicines and medical personnel. The consumption of medicines will increase the probability of generating revenues for each and every medicine industry. Also, there is a scope that bottled water companies like Aquafine, can start a business monopoly in this competitive market. Although, it can be stopped by maintaining some of the guidelines of using water (by educating locals) and some of the initiatives which are being taken by the government or some non-profit organizations (NGO). The final outcome of the research would define the core elements associated with the present water crisis globally (Kay et al., p.342).

2. Literature review
There are many theories on how humans can overcome the global water crisis and its other relevant problems. May all the theories instigate the social changes that the present society requirement. A theory is called Etiology and Change Theories, which can be implemented in order to get in-depth and vivid research of this crisis (Chaturvedi and Aaditya, p.99). As per the Association of Accounting Technicians (AAT), ‘Etiology’ is the root cause of the problems where the issue has begun from and the ‘Change Theories’ refers to how to and what to change in this crisis situation in order to get the natural flow of the society.

In this case, some of the applications are being provided by using the Etiology and Change Theories where the global problems on water crisis can be monitored and can be fixed to some extent. For example, it can be monitored with many of the conducted surveys of many communities where the government took part and with some of the non-profit organizations. Global water crisis

There is no material more important such as water for each and every life on Earth. The global water crisis is something in which humans struggle for the water quality and a certain amount of water for each by which an individual can utilize their basic needs (Naumann and Gustavo, p.3285).

Impacts of global water crisis
A global water crisis is a very big problem where many materials influences are present. For a crisis like this, a theory can be named which is the Malthusian Theory. This particular theory reflects that the natural resources are limited and with the increasing growth rate of population, human consumption rate can exceed the ability to provide natural resources from the very environment. It may sound very easy to figure out the ‘Malthusian Theory' but it has many aspects and also many negative effects on the very society where society can be considered as a dystopian society (Seddon and Nathalie, p.20190120). One of the negative impacts of this situation is diseases. There are many societies or communities that consume contaminated water and they are unaware of the consequences of consuming the contaminated water. This kind of water consumption can serve many diseases like Hepatitis A, Typhoid, Cholera, Polio, and so on. Apart from this, the medicine industries can be influenced by the situation and the cost of medicines can eventually increase. On the other hand, there is a high probability of famine which eventually started. Some of the communities are getting the required amount of clean water but on the other side, many communities are there who are not receiving the basic clean water which is their fundamental right. This situation directs a whole society towards the war and a major expression of war can be mutiny and the whole society can face dystopia as a whole.

Major issues associated with increasing water crisis globally
There are many problems associated with the increasing water crisis worldwide and each and every issue is affecting every individual directly or indirectly. As clean water consumption is a basic fundamental right for each and every individual the government should draw a plan in order to avail clean water for every family or for an individual. There are approximately 885 million people who are not getting clean water for themselves to use in their daily life (Mercure, p.231). On the contrary, if a family or an individual is consuming more water than required then that can be a huge loss for the whole society. Such a shortage of water can prove loss in the agricultural domain as well. The rising numbers of lack of education also have a contribution to this crisis where an ecosystem is getting affected continuously by the rising pollution. There are some of the plans that governments should walk on to prevent the already started dystopia and to preserve the remaining natural water bodies to serve clean water equally among citizens. This mass conflict can even create regional warfare where society can be diminished through this situation. It is not only a societies' problem but it equally affects the masses worldwide (Boretti et al., p.3).

Impact of consumption of ethically branded bottled water products on the global water crisis
There are many different brands that sell their 'Clean Bottled Water' throughout many nations. One of the top organizations is 'Aquafine’ who provides their clean water approximately in 33 locations from municipal tap water (Pacheco-Vega and Raúl, p.113). The organization ‘Aquafine' includes seven phases through which the provided water is being purified and the process is called the Hydro-7 purification system. The mentioned purification process also includes dissolving solid materials in order to purify water for mass consumption.

The company ‘Aquafine' also provides 'Clean Bottled Water' to serve more to the community for consumption. In 2002 the very first product was launched by a company named Pepsi Bottling Ventures (PBV) and at that time they had a huge capital to invest in the raw materials. They had a primary goal at that time which was to sell bottled water under the level 'Aquafine’.

As per a survey in 2006, America was using a huge amount of water each day, and used water is a waste or it may be called contaminated. Through the evolution process of the very society, the above-mentioned company is starting to set a price for each manufactured bottle of water and now it has become a multibillion-dollar industry. It has a positive contribution to this crisis and for this many people can have 'Clean Bottled Water' by spending some of their money. Lives have become an easy go with it and in many places of the United States, it can be seen that the usage of bottled water is heavily influenced and their purchase rates are high. Also, it has a negative effect on society because not everyone is equal in the very respect of the economy and there are some people who cannot effort the ‘Clean Bottled Water’ in daily life. In this case, the government needs to draw a plan for the very situation in order to resolve the problem (Pacheco-Vega and Raul, p.658).

Spreading Education and Awareness
A whole community, including the government and the non-profit organizations (NGO), needs to get a resolution to educate their citizens and to spread the awareness of consuming the contaminated water (Chidya and Russel, p.951).

Governmental Investments in Innovative Technologies
Some of the technologies such as, solar and UV ray filtration, water recycling where the government can invest an amount for the wellbeing of their citizens.

Making Agricultural Fertilization More Efficient
Approximately 70% of the freshwater is being used in agriculture (Edelstein et al., p.431). By monitoring weather, by using enhanced soil moisture sensors and with an advanced communication system it can be ensured that the used water is not being wasted.

Ethical consideration
Ethical consideration is something that depicts the formulation of evaluating the plan. It includes six parameters of no harm which are do not harm, voluntary participation, confidentiality, anonymity, informed, and only assess relevant components. Hence, for the present study, the researcher will highlight the authentic citations in the secondary information.

Chaturvedi, Aaditya, et al. "An overview of the potential impacts of global climate change on water resources." Water Conservation in the Era of Global Climate Change (2021): 99-120.

Pacheco-Vega, Raul. "(Re) theorizing the politics of bottled water: Water insecurity in the context of weak regulatory regimes." Water 11.4 (2019): 658. 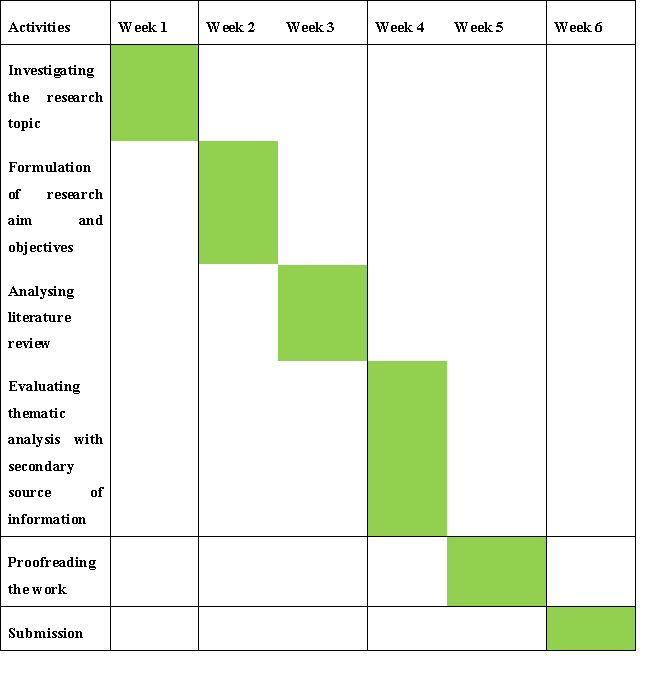