Task: Describe about the report for Paradox of affluence?

Introduction
The phrase paradox of affluence consists of two main words, one is paradox and other is affluence. When a statement is true but seems contradictory or is in contrast to common sense, is known as paradox. Affluence is referred to a situation where there is abundance of flow or supply of something like wealth or property. In a layman’s language, when there is a difference between material happiness and mental happiness, it leads to paradox of affluence. Paradox of affluence establishes that wealth can buy everything apart from happiness. The present paper will help in understanding the concept with reference to theories and Americans attitude and their responsibilities towards the country.

The term has been taken from a book written by David Myer titled as, “The Paradox of Affluence: Spiritual Hunger in an Age of Plenty”.  The book provides at length description about the imbalance in the material well-being and mental well-being that has been developed over the past forty to fifty years in the United States of America (Myers, 2000). Maslow’s theory of needs will help in explaining this phenomenon. The hierarchy provided by him states that the need for food and shelter are at lower level which needs to be fulfilled before any other needs related to personal satisfaction. The theory starts from the lower level and goes up like first it tends to fulfill needs related to psychology, safety, love and belonging, self-esteem and ends with self- actualization which is at the top. It can be stated that that Maslow’s theory is more related to happiness than money. Better personality or a smooth relationship cannot be bought by money so it cannot contribute to happiness (Baumgardner & Crothers, 2009).Income plays an important role in satisfying and meeting the basic needs of the lower income groups. Maslow’s theory is based on achieving the basic needs. When a person has food to eat, a home to take shelter, he becomes happy. When the basic needs are fulfilled, the person looks for safety and to protect his family. Once the family is safe the person looks for love and belongingness, then comes the need to maintain status in the society and last step is self-actualization or being self-sufficient (Berger, 2016).

Some of the needs specified by Maslow have been discussed below:

Psychological needs: It relates to basic needs of all the people like breathing, drinking, having food and sleep, and other biological needs. When people are unable to fulfill these needs they try to run after it in turn forgetting about wealth and happiness. People faced with natural calamities look for food before anything else.

Safety needs: Safety does not mean only being physically safe but it also means being socially and emotionally safe. If the person feels that he or his family is not safe then he will not think about happiness or wealth rather he will look for ways to maintain safety. A loss of job or family will hold back the happiness although a person may have wealth.

Need of love and belongingness: Every person has a family or a circle of friends who help them to overcome any situation and to pass through different stages of life. If this connection breaks then the person will be left alone to deal with the situations and would drift into depression or feel lonely (Myers, 2000). A person who is unhappy will not look for wealth rather will look for happiness.

Esteem needs: A person always tries to maintain his self-esteem and identity which makes the person unique. It can be gained through love and respect from family and friends. One’s capabilities and his uniqueness make a person happy and it is nowhere related to wealth.

Self-actualization: It is the last stage in the hierarchy and it states how a person can be and should be when they progress in their individual capacity.

The paradox of affluence comes into picture in the last two stages of the hierarchy and a person is in a position to identity that he is still not happy although there are a lot of items which he has bought in order to remain happy (Berger, 2016). The materialistic items can only fulfill the needs but it cannot lead to happiness or well-being.

Even the people who are rich are not happy as they are always after making more money in order to spend extravagantly. Advertisements have become an important part of all in today’s life which leads the people to buy different things without thinking whether they actually are in need of the product or not (Dwibedi & Marjit, 2017). A family going on vacations may be happier than a family watching an advertisement for a package to go on a family trip.

Paradox of affluence is a circumstance where there is an increase in the wealth without an increase in the happiness or there is stagnancy or decrease in the wellbeing. The argument over money and happiness has been a discussion point for many of the psychological experts.  The experts have tried to explain the relationship between money and happiness which can help in providing a solution to the paradox of affluence. As per their research money can bring some happiness to the people who earn low. There is an old proverb to which the paradox of affluence can be related to, it says, “Wealth does not buy happiness” (Dwibedi & Marjit, 2017).  There are number of people who believe that they would be in a happier space if they spend like rich people. They start spending on things which are not required.

America has had a long history and due to the great depression, the prices started increasing which led people to earn more. It is a fact that Americans are earning more but it is also a fact that the race of earning more money has led to a loss of mental health and happiness and people are more mentally disturbed now. The theory, paradox of affluence makes people to think about the gifts that they will be giving on the eve of Christmas rather than to ponder over religion or to think about traditions (Berger, 2016). There is a day dedicated to say thanks to others rather this should be habitual. People enjoy this day by going out with family to fulfill their extravagant needs rather than mingle with friends and extended family. The economic problems being faced by Americans in United States have been caused due to their attitude of being uneconomical in matters related to money. They have a mentality that more money can help them to achieve their dreams. Americans would be in a position to achieve happiness only when they start accepting the responsibility to solve certain problems related to their economy. They need to work on themselves in order to improve as individuals. The image below shows that when there is an economic growth and a technological growth as well, poverty and needs of humans can be balanced. 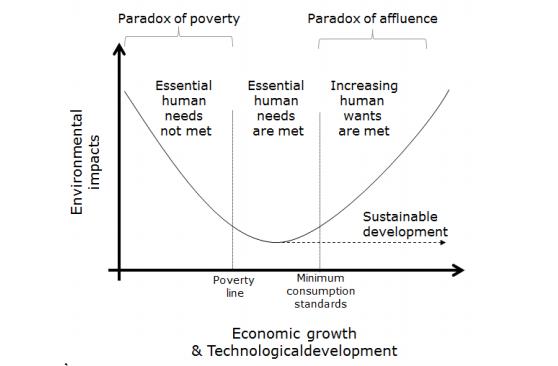 One of the major requisites of happiness is to share responsibilities. There is a saying from Thomas Jefferson, to never spend money before it is earned. The saying is perfect for such situations wherein a person falls into huge debts in order to maintain social status in the society.  With the advent of credit cards, it is easier for people to simply swipe the cards and purchase products or services which are actually not required at that moment. Credit cards are an easy deception technique wherein the person using it is under a belief that he has unlimited free money to use. But the belief can lead the person to be bounded under huge debts which cannot be redeemed back (Torbjörn & Karin, 2006). A credit card holder should first see the money that he has at present before making a purchase in order to pay back the credit card bills. People are being addicted to the attitude to collect material things. People of America make no complaints when their country goes into huge debts until they spend money which they do not have but once they are under debt, complaints starts pouring in.

There are some Americans who become confused or are depressed while achieving the level of happiness they are looking for. While making decisions, the Americans are at a dilemma to what to save and what to leave which makes them believe that if they buy everything, it will lead to happiness. There exists a relationship between Maslow’s hierarchy of needs, happiness and wealth (Torbjörn & Karin, 2006). If the fundamental needs are not met then people feel anxious. Though Americans are rich in resources but they are poor in terms of morality and spirituality.

The people of America should first correct their actions in order to be safe from others disapproving their actions. They have enough wealth to sustain themselves and help others but the latter is not being done and in order to achieve happiness one should help others who are not in a position to help oneself (Min, 2010). Americans should give up their attitude to compete with others in order to meet their standards and living style. They should help the government to eradicate unemployment and think to maintain a good environment by providing a helping hand to the people who are sick. It is really hard to provide some part of your income or time to an unknown or for an event that is not related to you. But this small help can make a much difference and it would benefit the government as well by decreasing its investment which acts like a middle man in the financial system. The government helps the needy which include some lazy persons through the taxes being collected from all the people. If people start to help others then they can easily identify between the needy and the people who are lazy and by doing this people can help the country and can save their economy (Min, 2010).

New business ventures can be started in order to provide jobs to the unemployed people of the country. People should start recycling and educate themselves to conserving energy in order to save the environment from degradation. Monetary help should be given for research purposes in order to find solution to the health problems being faced by sick people. A country needs to be helped by all means before we start complaining about the problems being faced. If the Americans start to take responsibilities to eradicate some of the problems and help in solving the problems of others rather than focusing on themselves then they will be in a happier space (Ellis, 2016). Happiness can be bought through wealth only when it is used to help others who are in need including the country. The occurrence of paradox of affluence takes place when people start thinking about marinating their status in the society and competing with others in fashion and standards rather than helping the country in improving the disparities.

Conclusion
In conclusion it can be stated that people are now required to audit their activities in order to ascertain what can give them happiness and what a waste of money is. The motive and goals needs to be audited before spending money. External standards should not be a parameter to look for happiness. Americans needs to understand how paradox of affluence works in order to bring stability and happiness in their lives as well as to help the government to run the economy.

Berger, D. (2016). The Privilege Paradox: The Effect of Affluence on the Adolescent Experience. Honors Theses. 272.

Ellis, A. (2016) The Paradox of Affluence: Positional Competition or Coerced Exchange? Sage Journals, 1(1).

Min, F.S. (2010) The paradox of affluence: Managing material aspirations and the politics of consumption. scholarbank@nus repository.

Myers, D. (2000) The Paradox of Affluence: Spiritual Hunger in an Age of Plenty. Yale University Press.