Task:
Given the provided scenario, explain the key considerations (must-haves) and constraints of the networking project at the firm’s new location.
Then make a well-reasoned recommendation of local area network (LAN) topology.
Scenario to be analyzed in this network architecture assignment
You work for an advertising firm with offices in Albany, NY, and Springfield, MA. The offices in Albany serve as the headquarters.
The Albany headquarters is home to the executive team and 150 employees. The headquarters also stores the corporate data and is the corporate internet backbone. It hosts the IT department that centrally manages all LAN services, including the wireless LAN. The IT department also manages the wide area network (WAN) that connects all of the offices via site-to-site virtual private network (VPN) tunnels. The Springfield office hosts about 50 employees. Approximately 50% of these employees are mobile, defined as traveling more than 80% of the time.
To hire and retain the best talent, the firm allows employees to work from home. This removes the constraint that employees have to live within commuting distance from the firm’s offices. Remote and mobile employees are provided access to the corporate network via a VPN client. The VPN client requires employees to have access to reliable internet services to allow for effective collaboration across teams and for access to media content. The company provides all employees with a laptop with full disk encryption, data loss prevention (DLP), and antivirus software. The IT department manages all corporate laptops and has the ability to log into all systems for support. This means that all laptops are centrally managed by the one IT department.

Due to an increase in opportunities for expansion to new markets, the firm has embarked on an initiative to hire and train new college graduates for the company’s Future Vision program. Future Vision focuses on global expansion. The initiative is to hire graduates into the marketing, finance, and IT departments. You were hired as part of the Future Vision program and have been working at this for some time now. You have spent a considerable portion of your time troubleshooting and analyzing the organization’s computer network to keep it running smoothly. Your direct supervisor and lead network administrator have been very impressed with your skills and fast learning abilities. To determine whether you are ready to take on more responsibility, you have been asked for your input regarding the new Fayetteville, NC, office setup project. Your task is to conduct research on this area and deliver a report to the team with key considerations and recommendations for the setup of the network infrastructure. The Fayetteville office will be home to 50 employees, including the new executive vice president of sales and marketing. All the possible sites have offices located in an office building with access to fiber, cable, and T1 internet service providers. In addition to the standard network, the site must support live video teleconferencing calls with employees based at the other sites. It must also reliably send print jobs to billboard printers located in the company headquarters in Albany.

Your primary task is to respond to these questions:
How would you approach designing the network at the new location in Fayetteville, NC?
What considerations are key in informing the systems and resources necessary to meet the organization’s needs and support the business goals and objectives?
Keep in mind that this milestone contributes to the final project for this course. It is designed to help you succeed in finalizing the project. You will complete two milestones that provide the opportunity to draft key sections of the project, receive valuable feedback from your instructor, and submit a finalized report for the final project in Module Seven.

Specifically, your report should include the following:
Key Considerations: Summarize the key considerations of the project, being sure to identify your chosen location. For example, what are the must-haves? What are the constraints? In this section, you will:Determine the appropriate communications media and mode of data transport for the new network.
This could be an opportunity to explain the OSI stack in relation to a modern communications network.
Identify the common network hardware components for this new location.
Describe the important IP range considerations for a company of your size.

Introduction
Aim of this paper on network architecture assignmentis to analyze the network requirement for the advertisement firm at new location. Scope is to define an appropriate topology that can help in smooth management of the business processes and its handling for the advertisement firm. This paper will highlight on the communication media, mode of data transport, and the technical approaches of the LAN topology best suits the requirement of the case study.

Mode of Data Transport
A communication mode that allows data transfer between the computer and devices is known as mode of data transport. It can be categorized into three types including simplex, half-duplex, and full-duplex. Simplex is a unidirectional data transfer approach that allows one device to receive data and other to send. In other words, sender cannot receive data or receiver cannot send data. Half-duplex allows the exchange of data from both the sides but at different instances. Full-duplex allows the exchange of data at the same instance between the devices. In the given case, Full-duplex mode of data transport will be needed.

IP Range
The office will allow 50 employees to be connected to the network at the same time including Vice president of marketing and sales of the firm. Class C Network range can be selected for this branch. Assuming ISP provides the ip 192.168.123.0 for use for the network, and then the configuration to the devices can be done ranging from 192.168.123.1 to 192.168.123.254 for the existing 50 hosts and possible expansion in the future.

LAN Topology Selection
Different Topologies
Linear Bus: All network devices and their nodes are connected to the linear cable as shown in the following diagram:

The advantages include less cable requirement for connecting the network devices as compared to other topologies and easies possible way to connect the peripheral or computer to the linear bus created using the cables.

The disadvantages include shutting down of the entire network if the main cable breaks, terminators needed at both the end of the cable backbone, difficulty in identifying the fault and not a fit solution for large number of hosts.

Star Topology: In this topology, each node has a direct connection to the central network concentrator, switch or hub as shown in the following figure: 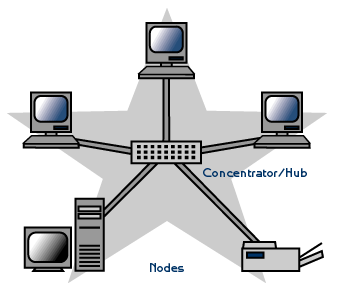 Advantages include easy wiring and installation as compared to other topologies, easy fault detection, and no disruption to the entire network due to certain fault.

Disadvantages include expensive as compared to other topologies, nodes will be disabled if the switch fails, and requires more cable as that of linear (Qaqos, Zeebaree, &Hussan, 2018).

Tree Topology: It is a combination of the star and linear topologies as shown in the image: 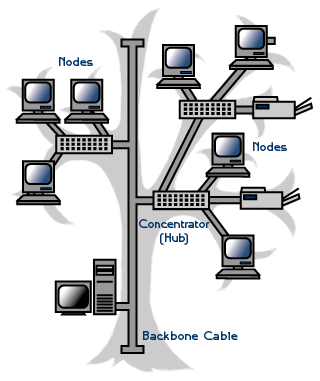 Advantages include support by software and hardware vendors, and individual segments have point-to-point wiring.

Disadvantages includes; depending on the type of cabling, the length of each segment is limited, complex configuration as that of others, and disruption in the backbone causes entire network failure.

Selection
Considering the future growth, and cable type, start topology can be recommended as best approach for the firm for this new branch establishment.

Conclusion
It can be concluded that the star topology can be used for the new branch network configurations. The above analysis helped in understanding the media and their types those are worth considering for establishing a new network topology for the firm. The above report also highlighted the network devices those will be critical for this network topology.