Task: Prepare a report on computer architecture assignment discussing about the concept of operating system (key functions and types) in detail.

Introduction:
This computer architecture assignmentis based on Computer networks & Operating systems. Operating System (OS) helps to manage the processes and memory of computing devices. It permits for communicating with another computer. OS can set up User Interface, and execute lots of services for application software. This assessment paper is going to describe the OS concept with key functions, and different types of OS. Along with that, usages of CLI commands on Windows OS, Linux OS are explained with screenshots efficiently. Batch scripts on Windows OS, Linux OS are also implemented in this assessment report effectively. This paper gives scope to one reader to enhance knowledge about Operating systems.

Operating System & key function:
Operation System:
Operating System (OS) is an important program that is almost first loaded upon one computer system. By using OS, communication is possible between system and user. OS translates all instructions to machine learning [1]. A computer system can understand this machine language. Operating systems may work as the intermediary between computer hardware and the user. It also offers the requiredenvironment to perform different programs effectively.

Types of OS:
There are six types of Operating systems and all these types are-
• Distributed OS:
This Operating System is usually recent advancement within the computer technological field. In this OS, remote access is always available to systems that are inter-connected to networks [2].

• Batch OS:
More people can able to share batch OS. It is 1st OS for 2nd generation computers. It does not interact with any computer device.
• Multi-tasking OS:
It is referred to as "Time-sharing OS" that gives access to multiple users and every user can CPU time. It may enable people-centered at various terminals for using a single computer device [2].
• Real-OS:
This operating system may serve real-time systems. All systems are beneficial in which more events may happen [1]. Two types of real-OS are Hard real-OS and Soft real-OS. It can give more outputs from different resources and all systems are error-free.
• Mobile OS:
It is an OS for tablets, smartphones, etc. this is considered as a platform and different applications run upon mobile devices through the platform.
• Network OS:
Network OS may run upon servers ad well as manage networking functions. It allows sharing of different applications, files, security, and printers, etc. modern technologies can update systems easily.

A common key function of general OS:
• Processor Management:
It aids the operation system to make and remove procedures. Apart from that, it offers mechanisms for communication and synchronization among procedures [2].
• Device Management:
This function keeps track of each device. I/O controller performs tasks of de-allocation and allocation of devices.
• File Management:
This key function controls files regarding tasks like organizational storage, naming, retrieval, protection, and sharing of files [4].
• I/O System Management:
The main objective of OS is to conceal the peculiarities of hardware devices.

• Memory Management:
Main memory can give fast storage that might be accessed by the CPU. It performs the allocation task and de-allocation task of memory space.
• Security:
This security module can secure the data of computer devices against unauthorized access and malware threat. It gives different techniques that ensure the confidentiality and integrity of user data.

Usages of CLI commands within Windows/Mac OS:
Term ‘CLI' stands for "Command Line Interface" which is usually text-based UI (User Interface). It is applied to view and monitor computer files. CLIs are also referred to as 'Command-line user interfaces' that may console UIs. Command Prompt is one type of command-line-interpreter application that is available in Windows OS [2]. This is applied to perform entered commands. Often, it is considered cmd prompt, cmd.exe. The operating system (Windows) supports CLI that power users and programmers employ to act file management operations efficiently. Command prompt in Windows is an important as well as powerful function that lets users' action [3]. Users can able to create shortcuts in order to pin the taskbar of information about computers. Windows consist of command lines that may show the Windows OS version running upon computer devices. The most useful CMD commands for Windows OS are-

• Cipher:
Cipher.exe, built-in CLI in Windows OS, might be applied to decrypt or encrypt data upon NTFS drives. Along with that, it can delete data securely by overwriting this.

• File compare:
File compare is a major CLI tool that may be used to make comparisons among files to know the codding process in files. If there is any kind of binary or content code differences that one can access [3]. This is so normal program that will be compared on basis of binary files or text contents and also is possible of comparing both Unicode text and ASCII. It is so beneficial for displaying any unmatched line from two files set.

• Tasklist:
We can easily get running process upon systems from command prompts in Windows. “tasklist” command is used. By using the tasklist command, processes are selected based upon a few criteria such as running time, services, memory space, etc.

• Taskkill:
This command tool is effective and it may give more control and ability to end multiple processes.

Two Examples:
a. (cd..):
This command is used for moving back from one directory to its previous directory. This command helps a lot to the CLI programmer to move back from the current directory. 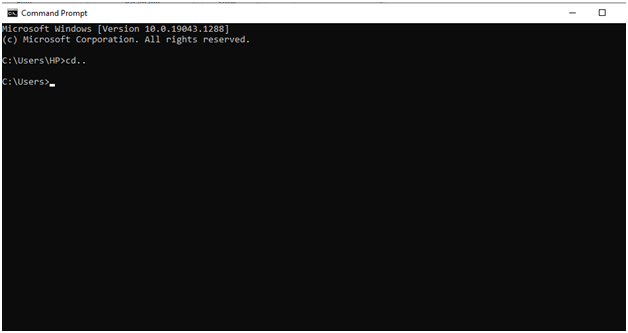 b. (tree):
This command is used to see the current directory structure. This command helps the programmer to check any files located in this directory.

Usages of CLI commands within Linux OS:
Linux means Kernel of System that may be sole controller happened upon computer device. X "runs Linux" considers System Kernel and also toolsets are applied in it.The entire component present in it must need to be verified, so we can able to utilize what each function does.

Kernel associated with Linux can able to run different types of software applications over different hardware platforms [8]. The computer device can act like one server system. That simply means it can manage primarydata. The system runs software or this may be applied as PC development within the software creating process. Linux is able to perform multiple roles. Linux consists of two types of approaches- non-graphically and graphically also [7].

CLI is based on text or it can be treated as the non-graphical interface to a computer device in which the user can type commands and the computer system can do it successfully. Terminal platform or IDE providesan environment associated with CLI [6]. CLI terminal may accept all typed commands and after that, it passes these commands to the shell. Then shell can receive and interpret what might be done by Operating System.

Examples:
a. (mkdir):This command is used for making the directory.

b. (tree):
This command is used for showing the current directory structure. 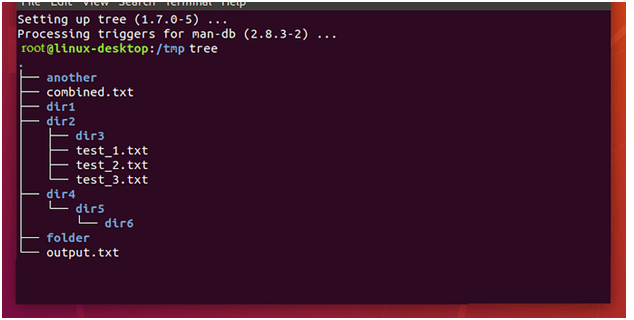 Batch Scripts within Windows/Mac OS:
Batch Script is assimilated to automate all repetitive command sequences. Batch Script aids advanced features like Arrays and Functions. It assists regular expressions. Scripting is one way in which one alleviates necessities through automating all command sequences for making the life of one at shell productive or easier [9]. Batch scripts might be restored within a simple text file consisting of commands lines. Batch scripts are simple and all commands are completed in sequence. It runs command prompt series operations. These files work upon Linux, Mac, Windows, etc.

Usages of Batch Scripts:
• Automating application deployment from one to another environment
• Set up servers for various purposes
• Programs installations upon different machines

In Windows, batch files can restore all commands serially. CLI takes files as input and after that, it also completes in the actual serial order [10]. A batch file can be treated as a simple text file and that is saved with (.bat)extension file. This is written with aid of making use of Notepad or text editor.

Commands of “batch files”:
• EXIT-Used to exit Command prompt.
• COPY-Used to copy any file.
• Pause – Applied to stop batch file execution in Windows.
• cls -Used to clear the screen of the command prompt.
• echo – It might be ‘OFF’ or ‘ON’
• :: - Used to add command within a batch.
• title- Can change displayed title text.
• VER- Can be used to check the version

Example:
a. Echo:
This command is used to print the current message on the screen. 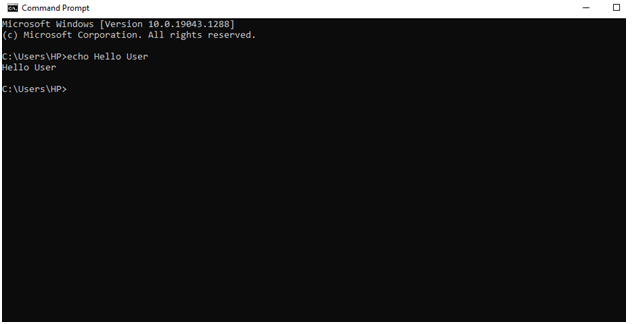 b. VER:
This command is used for checking the version of the current installed Windows. 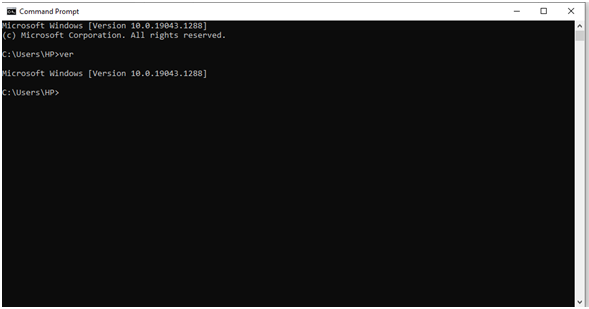 Bash Scripts within Linux OS:
Batch command is applied to reading commands from a particular file or standard input and performing them while a system can load permit level. Batch scripts might be applied to complete command chains one by another [5].

Syntax:
batch: This is essential to note that batch cannot accept parameters.

A batch file or script file is in OS/2, DOS. This has commands series to be completed by CLI, restored within plain text-file [11]. Linux Operating System is more flexible and file type is known as a shell script. extension file. To write batch files within Linux OS:

• Create a file
• Add code within the file
• Make executable file
• Run a file from the terminal.

Example:
a. (--version):
This command is used for checking the version of the GNU bash.

b. (cat):
This bash command is used for showing the content of the txt file.

Conclusion:
In the conclusion part, it is stated that Operating System acts as an interface between the user and components of computer hardware. OS can communicate with computer devices, without knowing language computer language fluently. Through the entire assignment report, CLI commands in Linux OS and CLI commands ii from OS are discussed with a screen lock. Batch scripts in Windows and scripts in Linux are described in this assessment with justified screenshots. As a finding, CLI (Command Line Interface) helps to review and manage computer files. Commands are run on Windows OS, Linux OS, and batch scripts are also run on Windows and Linux OS. However, this report is done efficiently by completing all requirements.